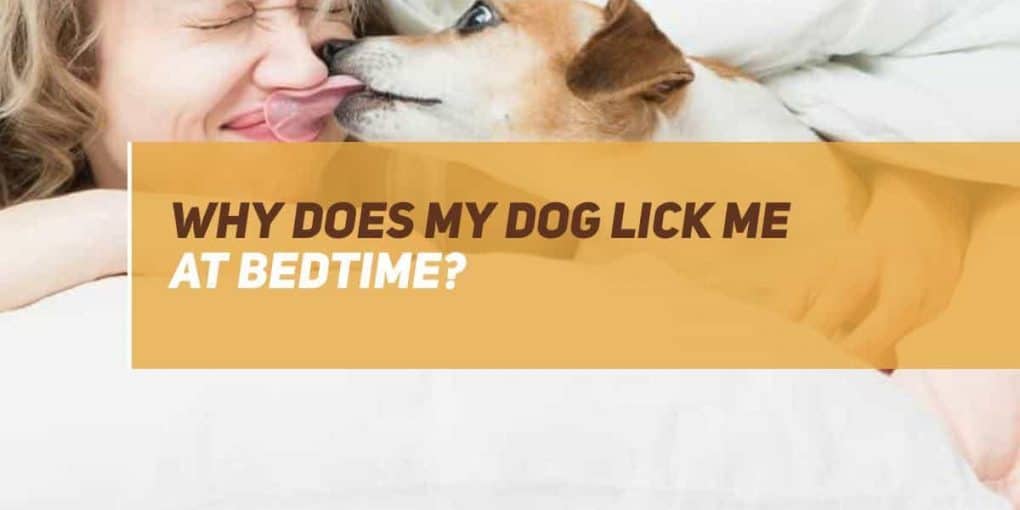 Have you ever wondered why your dog licks you at bedtime? One of the most stereotyped images is that of a dog licking its owner right before bedtime.

As a pet parent, you may have encountered this behavior numerous times and got yourself wondering if it’s the canine’s version of bidding you a good night.

In this post, we’ll explore some of the possible explanations behind pre-sleep licking and whether as a pet owner, it’s something worth losing sleepover.

Related Topic: Should you allow your puppy to sleep with you?

Possible Reasons Why My Dog Lick Me At Bedtime? 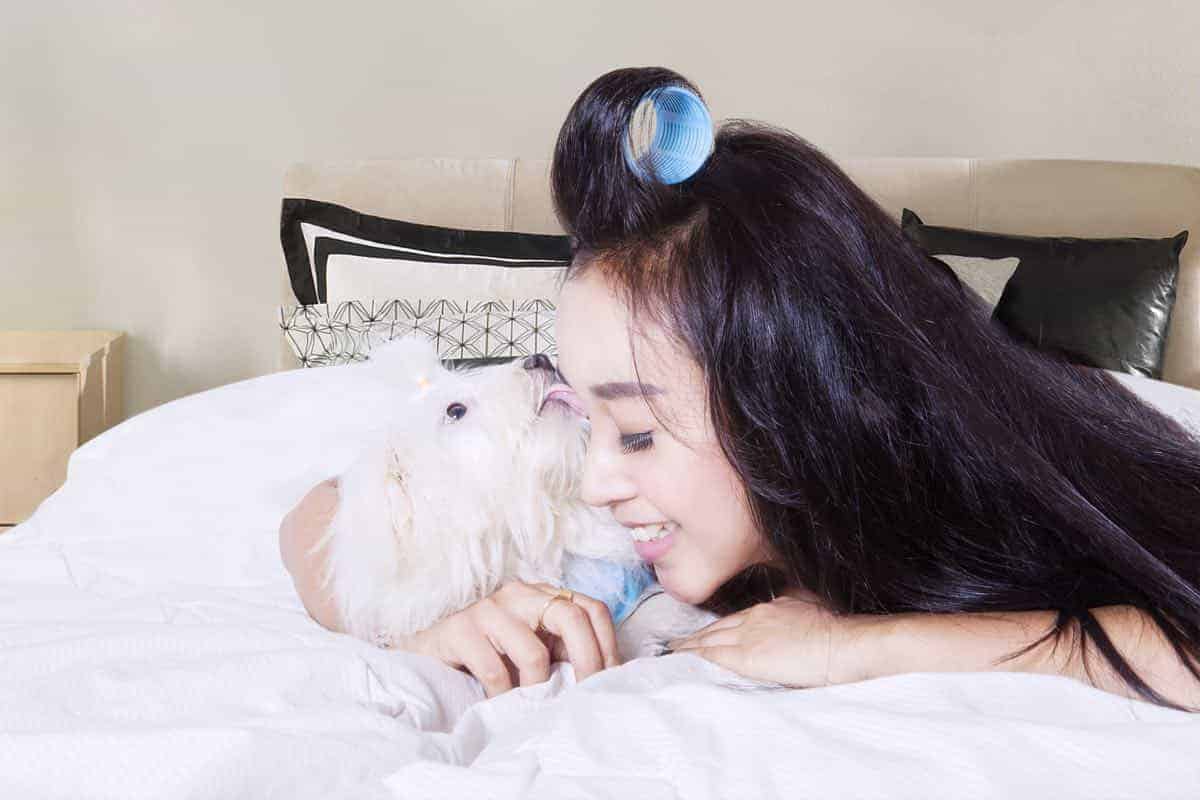 1. Reminds the Dog of Its Younger Days

One of the reasons your dog may lick you before bedtime is that the licking reminds the dog of its days as a puppy. Remember that when a dog is born, the first sensation it feels is that of a lick from its mother and littermates.

The dog then responds by licking back, and just like that, the behavior gets imprinted on its mind.

That explains why licking is more common and profound among pups. If you recently acquired a puppy, don’t be surprised if it licks you every day before bedtime.

The behavior stirs up the memories of when the dog was still with its mother and siblings. The puppy now views you as its parent, and since the reaction is intrinsic, the dog won’t mind licking you whenever the opportunity presents itself.

One of the ways dogs shows affection is by licking their owners. As you’re about to retire to sleep, the dog clearly understands that it will miss you for a couple of hours.

Therefore, licking is the dog’s way of expressing its love and affection to you and, perhaps, giving you a good night hug. Here are some affects to hugging your dog.

Remember that licking releases pleasurable endorphins, which make the dog feel pleasure and comfort. It’s comparable to the stress-relieving sensation that we get when we bite our nails.

Some dogs lick their owners at bedtime as attention-seeking behavior. Dogs love attention, and they often ‘complain’ (through their vocalizations) when we act like they don’t exist.

Licking you before bedtime may be a dog’s way of saying that “hey, why are you going to sleep while I’m still awake?”

Dogs that don’t feel appreciated enough will likely lick their owners at bedtime as they find the behavior consoling and reassuring.

You May Be Interested: 5 Tips to Control Negative Behaviors

Like humans, dogs also suffer from anxiety-related disorders. And separation anxiety is one of the most severe forms of canine anxiety.

Separation anxiety sets in when you’re always gone, and the dog has to spend much time home alone. If you leave your house too early and come back home too late, you may never have enough time to cuddle with your pooch.

Since you only happen to be home around bedtime, you’ll likely be one of the targets for your dog’s extreme licking behavior.

Our skins naturally secrete salts, and dogs love the taste of this salt. You’ll observe that most dogs tend to lick their owners during and after workouts. They love the salty taste of your skin.

If you had a busy day and forgot to jump into the shower, the smell and taste of your sweat will keep your dog entertained by your bedside for some time.

See Also: Why do dogs scratch the bed before lying down?

​Remember that salt induces sensations of thirst, which may cause the dog to lick you even further.

Another reason why your dog may lick you at bedtime is due to boredom. Licking is more common among dogs that don’t get enough activity during the day. Without a way to let out their pent-up energies, dogs may resort to licking their owners.

When it happens at bedtime, you should be worried because your pooch will unlikely to get a good night’s sleep. Providing the dog enough physical and mental stimulation may go a long way in preventing boredom-related licking.

Any doggy behavior without an apparent explanation might be a result of an underlying medical condition.

So, if a dog licks you profusely before bedtime and you’ve ruled out all the other possible causes, then the chances are that the dog might be suffering a medical condition.

Usually, these are conditions that manifest in anxiety as well as obsessive and repetitive behaviors. An example of such disorders is the sundown syndrome in dogs, which is common among older dogs with canine dementia. 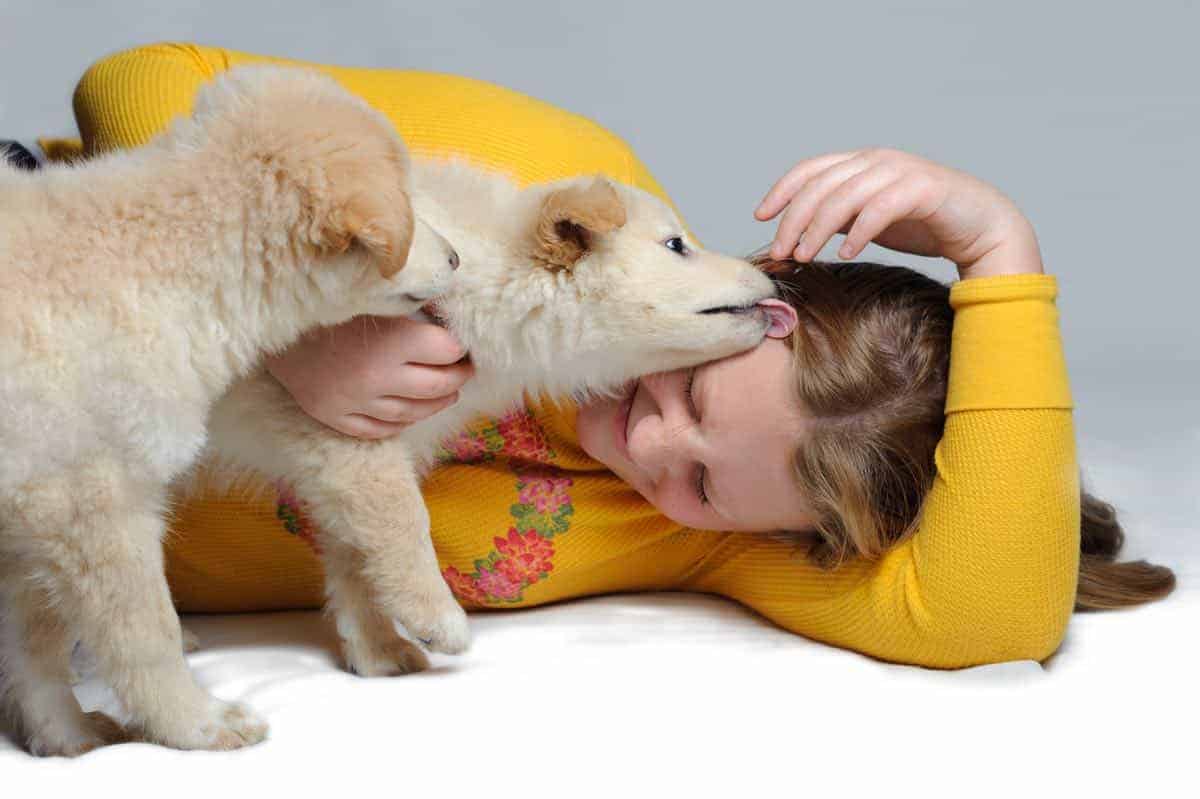 Why Does My Dog Lick Me At Bedtime

Is A Dog’s Lick Dangerous?

If your dog gives you a few licks before bedtime, there isn’t a cause for alarm. However, if the behavior is abnormally repetitive and profuse, then you have all the reasons to be worried.

Remember that dog saliva contains lots of bacteria, yeast, and viruses. The good news is that a dog can only transmit most of these bacteria to other dogs.

The bad news is a few can be transmitted to humans are considered highly toxic. A dog’s saliva contains anaerobic bacteria which remain inactive and denatured in the presence of oxygen.

But when these bacteria enter our bloodstream, they become 100% potentially infectious.

Also, note that over 80% of bacteria in a dog’s mouth aren’t present on our own. Therefore, our bodies cannot tolerate these bacteria when they enter our system, be it orally or through an open wound or skin incision.

If your dog licks you after licking its anus, there are chances it could pass on roundworm eggs to you. Even histatins, the proteins in a dog’s saliva that prevent infections, may be potentially dangerous to humans.

Other harmful organisms that can be transmitted by a dog’s lick include bacteria salmonella and E. coli, as well as parasites Giardia and Cryptosporidium.

How to Prevent Your Dog from Licking You Excessively At Bedtime

When a dog licks its owner before bedtime is perfectly normal behavior. However, you should know when the licking symptomizes something deeper and immediately take the necessary remedial measures.

If you find it disturbing to have your puppy lick you at bedtime, be consistent and let your puppy know this is not acceptable. Consistency is the key to teaching your dog tricks or expected behaviors. 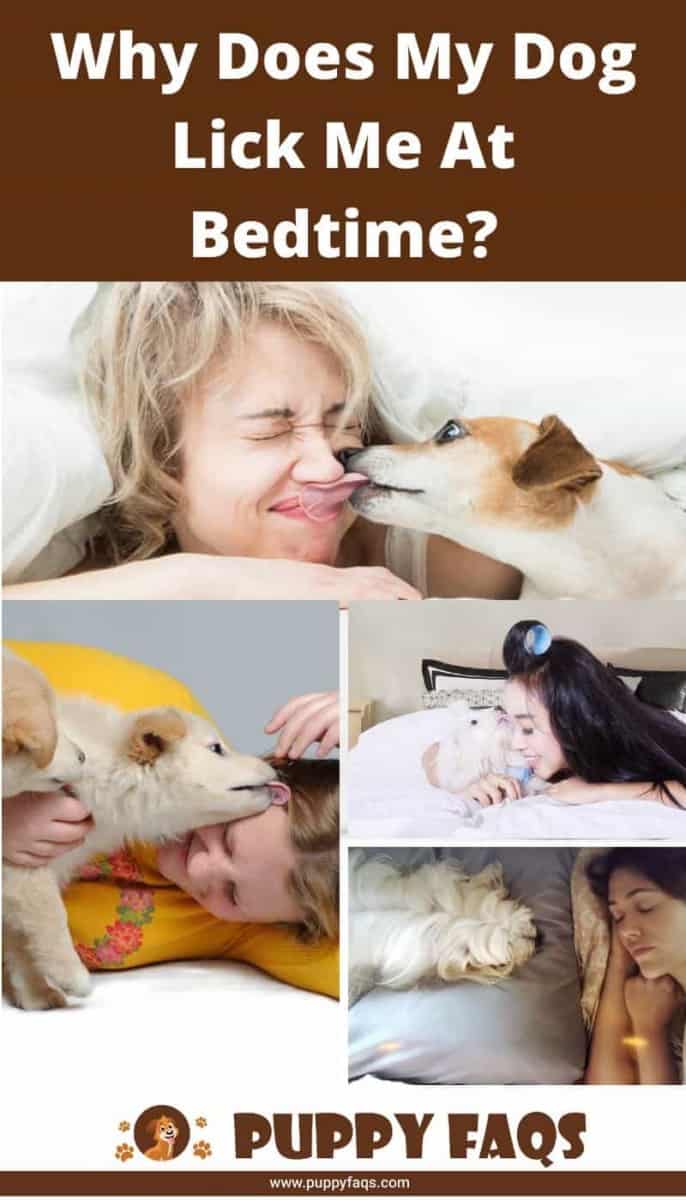 Can You Bathe A Puppy At 8 Weeks?