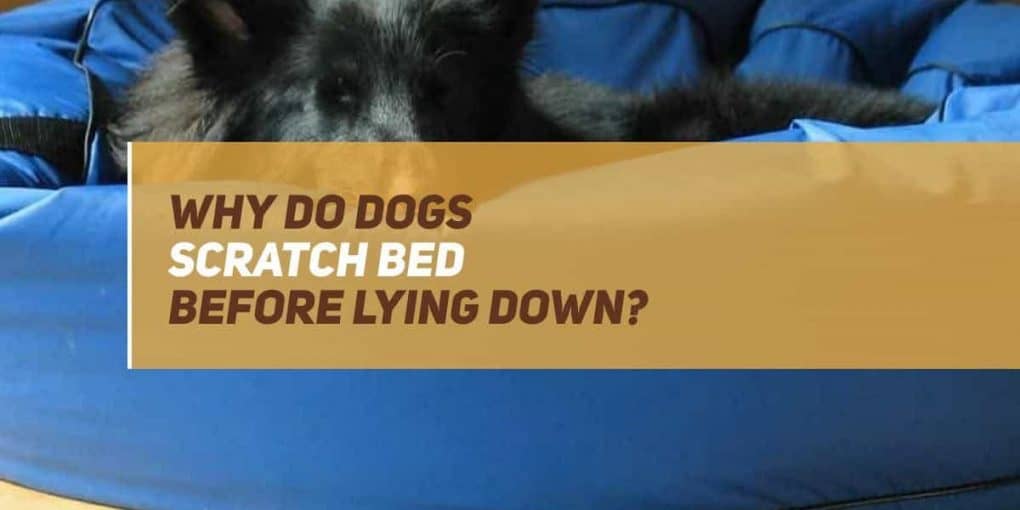 Amongst the seemingly odd behaviors that our funny dogs tend to exhibit in front of us, the frantic scratching and digging at a bed, cushion or blanket before settling down in the space for a nap is one that may leave you feeling both amused and baffled.

If you have ever watched your dog for what seems like an eternity while he digs around in circles in a dog bed that will be the same when he finishes his work, you may want to know – why do dogs scratch the bed before lying down?

​In this article, we will dig a little deeper and get to the heart of what exactly is going on.

In this article, we will discuss: 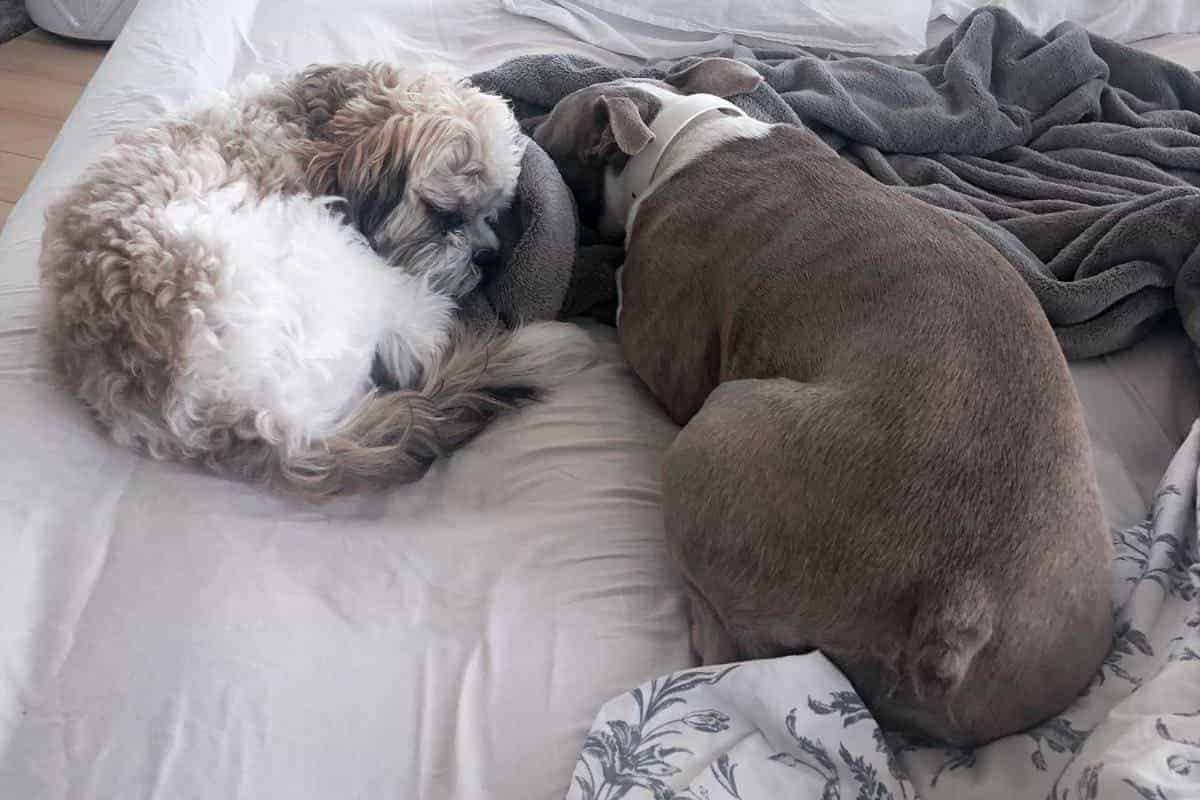 Dogs And Their Natural Instincts

Have you ever plumped a cushion before sitting on it? If so, then it would be natural to believe that this is essentially what a dog is doing when he digs and circles to prepare a spot for rest before settling down on it.

But is this actually what your dog is doing? It might seem like a fast way to settle down for a nap.

If you have ever witnessed some dogs performing this weird ritual, you will notice that they can often seem very agitated and engrossed by the activity, like it is a real chore and highly relevant.

Experts had suggested that dogs have a deeply ingrained set of instincts that go back to their wild ancestors, long before the domestication of dogs began.

Preparing the den in the wild would have been a critical task linked to a dog’s survival, as they need to remain warm and safe throughout the whole night when they are at their most vulnerable.

When you see a dog digging at a cushion in a similar fashion, you may wonder why it is doing so when your dog doesn’t need to ensure that he is safe and warm for the night.

According to the theory, the behavior is based on instincts, though, and not on necessity.

Why do Dogs scratch the bed before lying down?

When you observe a dog preparing himself to settle down in a chosen spot, you may notice them spend quite a bit of time digging at the bedding, or even a flat surface such as a rug or sofa.

The similarities between this behavior and what a dog would have been doing in the wild suggest that the dog’s instinct is to dig a hole and spread bedding to make a nest.

In the wild, it would have been essential for a dog to dig a proper hole to sleep in that would protect it from the harmful elements, either extreme heat or extreme cold.

A hole also provides more protection against predators by helping to camouflage the dog and therefore helping to make him feel safe so that he can relax and sleep peacefully.

Digging before settling down may also be your dog’s way of regulating his body temperature. That burst of activity may serve to warm him up, for example, before he settles down for a cozy nap. 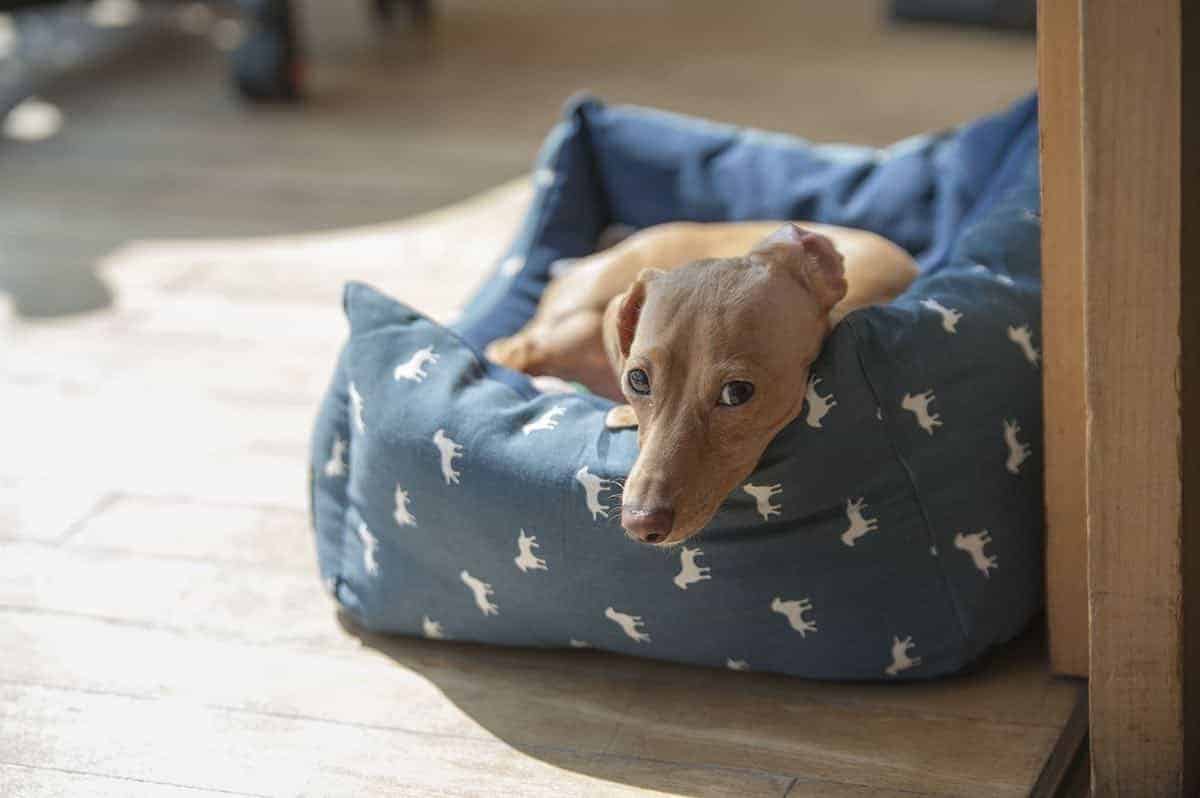 Why And How Dogs Mark Their Territory

The act of marking territory is fundamental to a dog. This is also something that has followed the species through evolution but also has a relevant purpose in our pet dogs’ lives today.

Dogs experience their whole world, mostly through their sense of smell. Scent is a powerful tool providing dogs with the information they need about their environment.

Dogs, like cats, use scent to mark their territories and communicate with each other.

A significant territory is a dog’s home and a dog’s bed. When you notice your dog digging or pawing at their bed or wherever they want to settle down, they are not only preparing the space for safety and comfort but also marking it as their own by releasing their distinct scent through the scent glands on the bottom of their paws.

This is where they secrete pheromones from, including from in between their toes. Surrounding themselves with their scent helps them to feel calm and secure.

Digging and pawing at surfaces helps to secrete the pheromones, embedding it into their territory where it will stay for a long time, ensuring that other dogs and animals know that this territory has been taken.

It is more likely that your dog is claiming territory; however, when he digs on harder surfaces such as your kitchen floor. 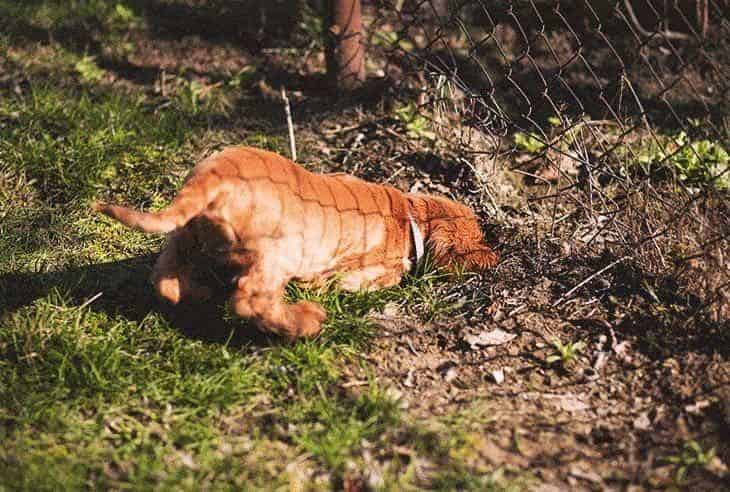 Dogs That Dig To Investigate

If your dog is mostly digging amidst soft surfaces like a carpet or dog bed, then they are less likely to be doing so to leave their scent and claim the area as their territory.

Instead, the digging behavior may be your dog’s way of “investigating.”

Digging helps to release old scents, and so if you spot your dog doing this, it may be that something has sparked their interest, and they are digging to acquire more information through scent.

It may not be exactly what you want to hear, but if your dog is digging at your sofa, it could be because another animal, such as a rodent, has passed by there.

Alternatively, it could be the scent of crumbs that your dog is after, which is perhaps more preferable. 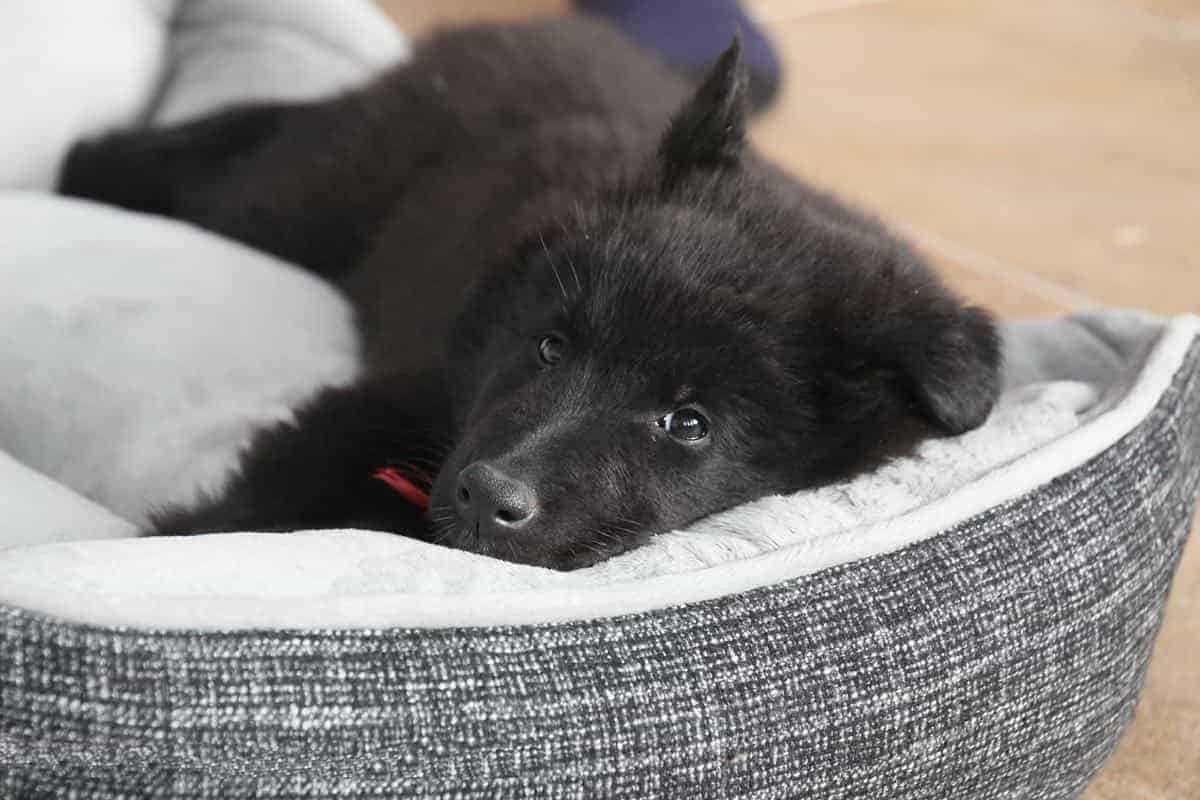 How Anxiety Can Affect A Dog’s Behaviour

If your dog’s digging is seemingly unrelated to all of the above, then it may be that the behavior is a compulsive one that is directly related to some anxiety that your dog is dealing with.

Stress can manifest itself in many different ways, causing a dog to exhibit unusual and seemingly unexplainable behaviors.

You should be able to tell whether your dog’s behavior is related to a behavior problem if you notice that it is not followed by a long period of rest, which would generally be the primary goal and destination of the digging.

Digging caused by anxiety will only cause your dog to become more and more agitated and over-aroused as they are often reinforcing and increasing the stress by continuing to dig.

Take note of when the digging behavior begins. You may be able to attribute it to the anticipation of something that your dog finds stressful.

For example, if you are preparing to leave your dog alone in the house. In this case, your dog is likely to have developed some level of separation anxiety, which can be the cause of so many destructive and antisocial behaviors in dogs.

Other reasons your dog may be anxious could include the introduction of another pet or person in the household.

Animals are susceptible to change. Excess energy may also need to be spent somehow if your dog is not getting the physical and mental exercise he needs, and digging may be his way of spending it.

If you are worried that stress and anxiety are causing a behavioral issue with your dog, the first thing you can do is take them to be checked by your veterinarian.

While your vet won’t necessarily be able to provide help with a behavioral problem aside from some general advice and perhaps a referral to a behaviorist, they will be able to check your dog over and eliminate any medical reasons for the behavior.

Our dogs’ quirky behaviors can often lead to us questioning the reasons behind them, and this is always a good thing as it leads to us understanding our dogs that little bit better when we know what our dogs are doing and why we are better able to help them.

It can also put our minds at ease if we discover that the behavior is normal, no matter how weird it may seem to us. 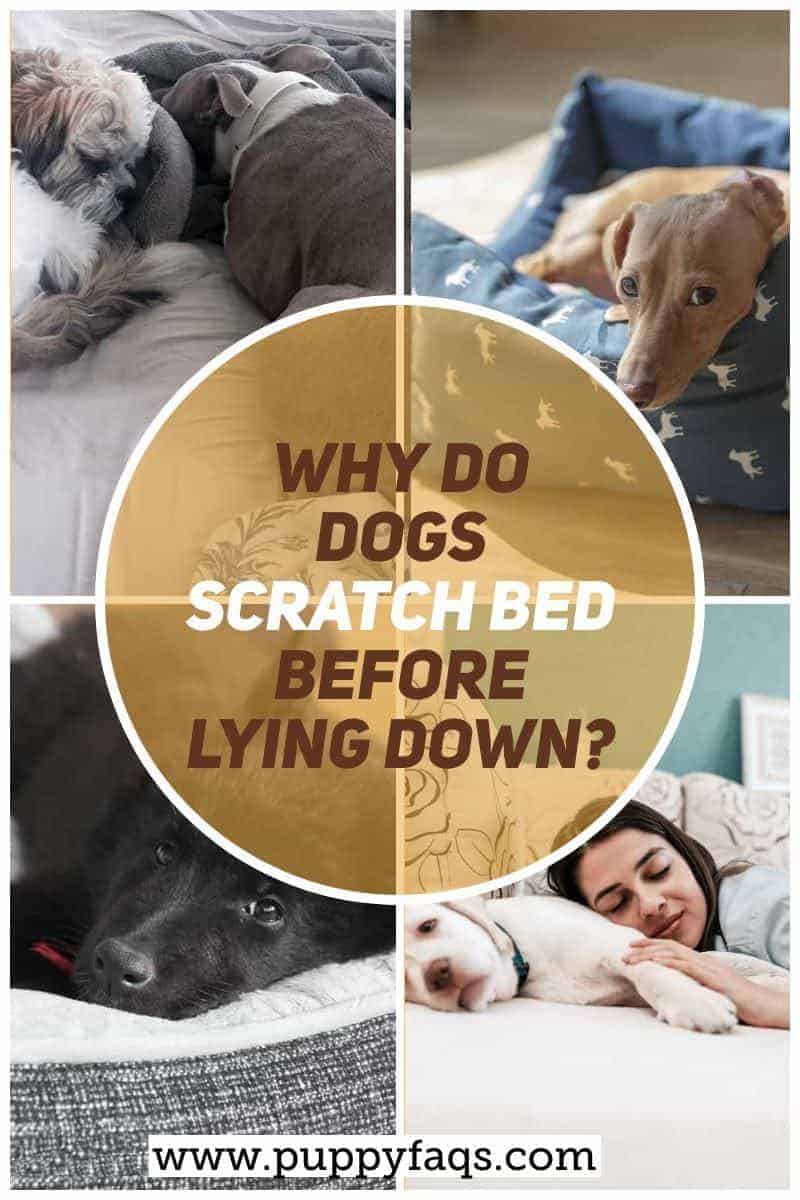 Can Dogs Eat Peas: What You Need To Know

Why Dogs Eat Grass? The Answer Blows Your Mind!

Why Are Dogs Afraid of Balloons? The Surprising Truth?

Why Do Maltese Lick So Much? The Surprising Truth!

Why Does My Dog Stare At Me? The Surprising Truth!

Can Dogs Eat Sweet Potatoes? Good or Bad for Dogs!

Can Dogs Eat Mustard? Is it Good or Bad for Dogs?

Why Are Dogs So Happy When We Come Home?

I'm a self-employed blogger, life-long pet parent, and lover of dogs. I have always loved animals, especially puppies. So when my family got our first dog 15 years ago, it was love at first sight. We named her Sassy because she was so small, cute, and had a sassy personality! Once we got her home, I wanted to know everything about caring for her, so I researched online. Eventually, this led me to create the PUPPYFAQS website, where I write about nutrition, health, and care of puppies and the latest news in the world of puppies. In my spare time, I volunteer at my local shelter, which is run by volunteers who are passionate about helping homeless dogs find their forever homes. If I'm not working or volunteering for dogs, you can find me spending time with my family, friends, and my puppy. I have been writing professionally online since 2009. In addition to PUPPYFAQS, I also write for several other pet-related publications.