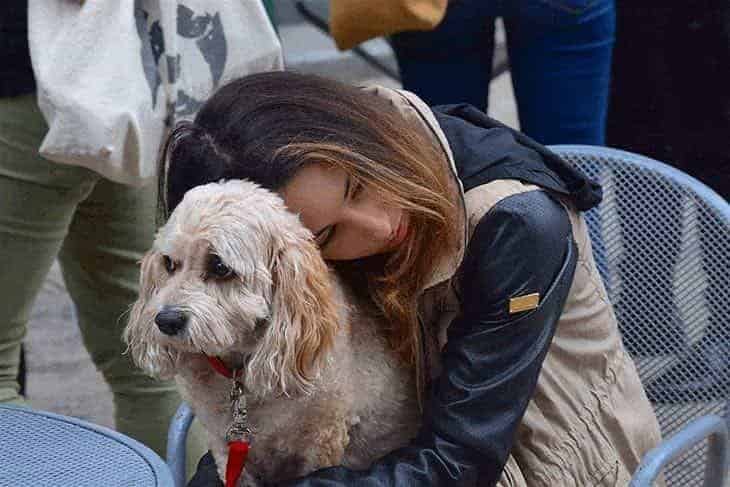 5 Surprising Effects of Hugging Your Dog

Recently, many dog owners have been hearing that researchers determined that it’s best not to hug a dog.

While it’s may be true that some dogs may not like being hugged, it’s always important to read your pet’s body language, many dogs love being embraced.

Furthermore, you may get some significant – and surprising – benefits to hugging your dog, for the both of you. Here are six of the most exciting effects that happen when you hug your pet.

Effects of hugging your puppy you may not know

1. Both you and your dog will be healthier after a hug The act of hugging is very relaxing, not just for the mind, but also for the body. During a hug, the heart rate is reduced, and the brain releases oxytocin. This happens in humans and dogs, and it has a very significant impact on the body.

When stress reactions are calmed by the lowered heart rate and the rush of “feel good” hormones, the body isn’t being overworked, and it helps to reduce physical things like pain or fatigue.

2. Hugging gives both parties a sense of belonging One thing that hugs do for both dogs and people is to offer them a sense of being connected to the other party. As pack animals, dogs often rely on touch to communicate a sense of belonging and contentment. Humans are the same way in many cases.

For example, many scientific studies prove that babies who are given plenty of skin-to-skin contact with their mother in their first year are less likely to develop sleeping disorders, colic, and may even be less likely to get colds or fevers.

All of these are because of the profound way that makes us feel as though we are in the place where we belong. There have been many stories of shelter dogs that were afraid of humans until patient people used the gentle touch to teach the dog to trust them slowly.

Hugging your dog can make them feel as though they are part of your “pack,” which furthers your bond.

3. Hugging can help us fight off illness and infection Here’s another way that hugging can help keep us physically and healthy. The action of hugging also stimulates the production of white blood cells in the body, which fight off illnesses and foreign bodies.

Not only does hugging feel good because it helps reduce depression and boost happy hormones, but it also feels good because it is physically helping to resolve pain and illness.

This works both ways; your dog also gets the same benefit from a good hug. Don’t let the fear that you are passing germs back and forth to stop you from going in for a cuddle; your boost in white blood cells will help your bodies handle the exchange and then some.

4. Hugging creates a higher sense of self-esteem and love It’s not a secret that humans use hugs as a way to express connection, affection, and love. Receiving many hugs can make us feel more secure and worthy of love because it tells us that we’ve done something to make others want to express affection towards us.

While dogs don’t exactly hug each other, many do recognize hugging as a way that humans show affection and approval. When you hug them, they get to feel that rush of doing something that made you want to connect with them right away.

This gives them a sense of security in your friendship, and a boost of confidence that they are a good boy or girl. For a dog, feeling as though they are loved is one of the critical things for giving them a very high quality of life. The last way that hugging can offer surprising benefits for your dog is that a hug can help dogs un-learn some bad habits.

If a dog has stayed in a shelter, on the streets, or in an abusive home before, the chances are that they have some harmful habits when it comes to humans.

Teaching dogs that they can not only trust you to touch them but to do so for a prolonged period is a perfect way to help them stop doing these things. Hugging your dog could be a way to help them feel secure enough that they stop destroying your belongings out of anxiety.

Related Topic: Why do puppies lick themselves?

How to Touch a Dog That Doesn’t Want Hugs At the beginning of this article, we learned that some dogs genuinely don’t like being hugged. There are veterinarian and canine behavior specialists who have concluded that hugging can make a dog feel trapped and anxious.

Learning how to read your dog’s body language can help you determine if your dog wants to be hugged at a given moment or not.

For example, if your dog pulls their body away from your chest when in a hug, or keeps their face pointed away from yours during a hug, chances are they do not want the hug.

Watch for signs like ears being pinned down flat, darting away from you when you go in for a hug or any whining or growling. These signs show that a dog isn’t interested in being restrained in a hug – and that’s okay. You can still show affection to your dog.

If your dog doesn’t want to be hugged, you can still achieve all of the effects listed above merely by petting, scratching, and talking to your dog.

Studies have shown that people have as many stress-reducing reactions to petting a dog as they do hugging one, and dogs similarly have a very soothing response to being petted.

If you aren’t sure that your dog is interested in a hug, know that you can give them as many great benefits through a good scratch on the tummy or pat on the head instead.

Does your puppy like to be hugged? Let me know in the comments below.

Can You Bathe A Puppy At 8 Weeks?