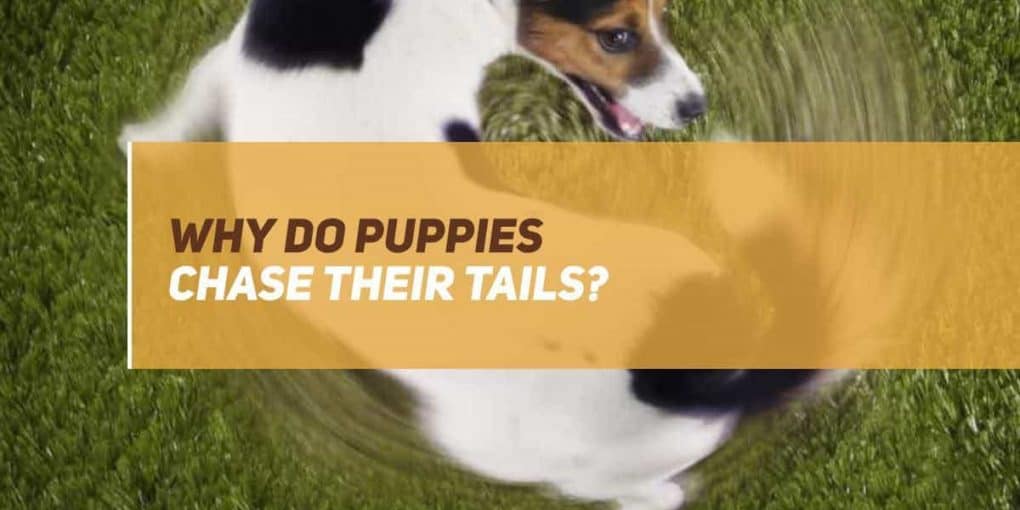 Why Do Puppies Chase Their Tails?

Puppies do some bizarre things, don't they? One of the main reasons we love them so much is for their entertainment value.

They make us laugh and feel something like love. If you have brought your new puppy home recently, you are probably enjoying discovering all of their funny little quirks, and you may find yourself feeling baffled and thinking – why do puppies chase their tails?

In this article, we will attempt to answer this question and work out if this is a behavior that should concern us or not.

In this article, we will discuss: 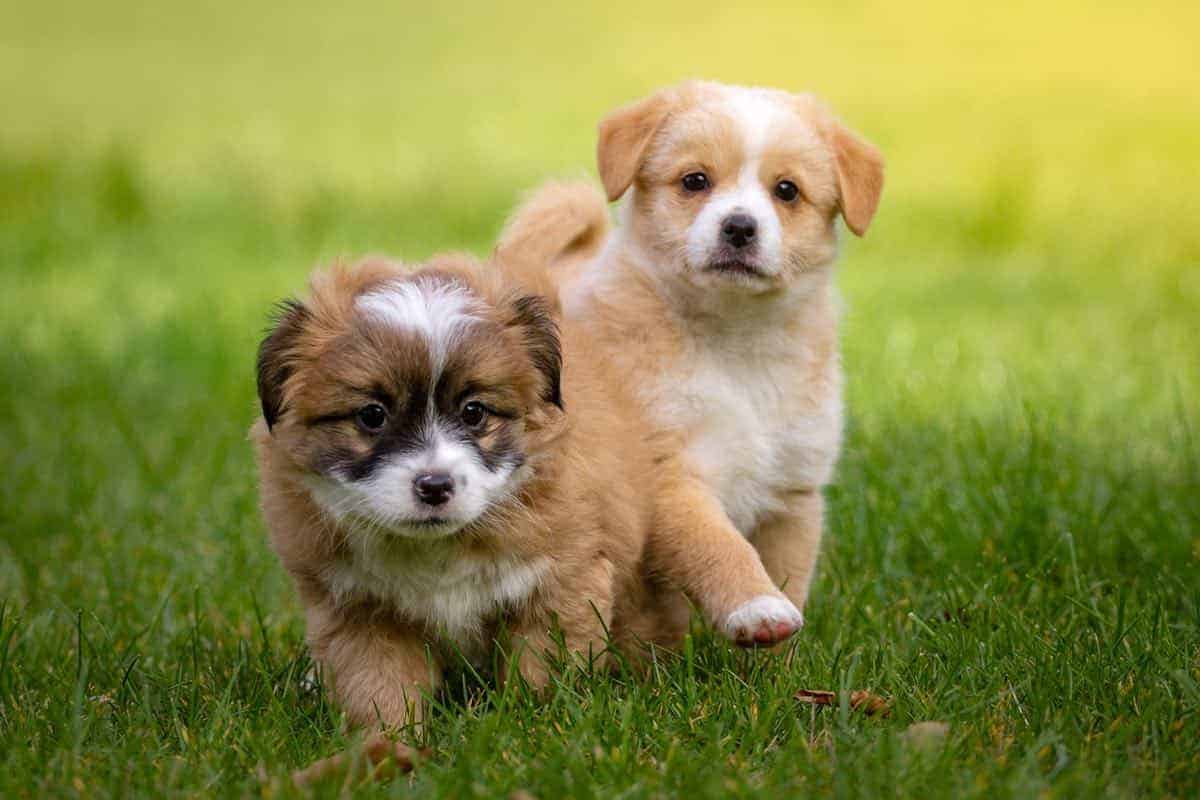 What Makes A Puppy Chase It's Tail?

If you have ever had the pleasure of observing your pup chase its tail, you will probably have found yourself in fits of laughter.

It is quite an amusing sight to see a cute puppy suddenly, out of nowhere, makes it his mission to catch his tail.

What makes it so funny is that it makes absolutely no sense whatsoever. But it is precisely this reason why we should think a little more deeply about what is happening here.

While you may think that your puppy is just playing, the more likely cause of tail chasing is boredom.

If your pup is directing their play towards themselves instead of towards you or the toys that are available for him to play with, then this should be thought of as a problem and not encouraged.

Why do puppies chase their tails?

Puppies shouldn't be left to become so bored and under-stimulated as to have to find amusement in chasing their tail.

If you find that your puppy is repeating this behavior, it may be time to start looking into some solutions to prevent the action from developing into something that you can't control.

Another reason for tail chasing in puppies and dogs is attention-seeking. Your puppy is a very talented little creature, and he may have quickly learned that chasing his tail results in your attention, and the recognition of whoever else is in the room, to be directed on him.

When your puppy performs attention-seeking behavior, whether it is barking and whining, causing trouble, or playing tricks without direction like chasing his tail, and they then receive the attention they were hoping for, the behavior that leads to it is then reinforced.

Reinforced behaviors get repeated, and if you are not careful, this can get out of control.

It might be funny to see your puppy chasing its tail once or twice, but if they begin to do it frequently, that amusement can quickly turn into bemusement, concern, and even annoyance or embarrassment. 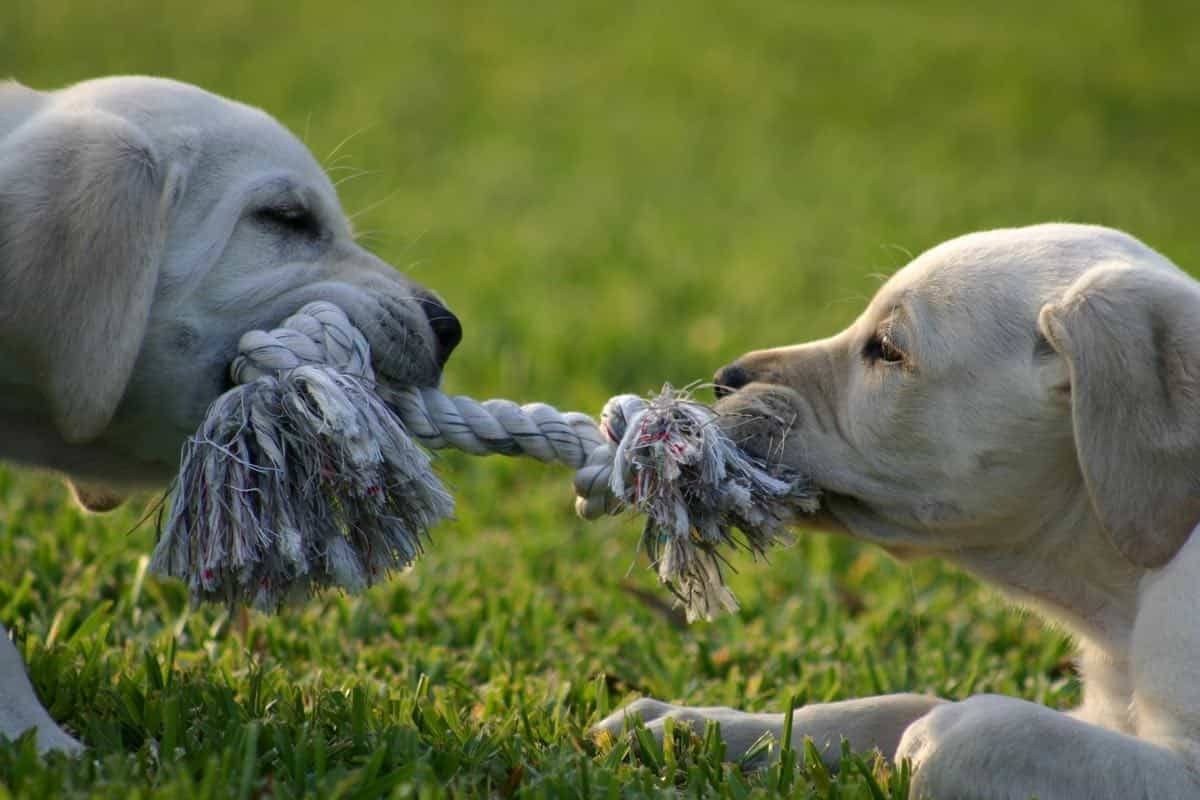 It is essential to distinguish between playful behaviors and compulsive behaviors. It is not considered a problem; for example, if your pup catches sight of his tail and out of curiosity sets out to chase it down, not realizing that it is attached to his behind.

But when a puppy begins to repeat the behavior, there is usually a deeper reason behind it, other than innocent and harmless play.

It is not clear how genetics play a role in tail-chasing behavior, but research has shown that certain breeds of dogs like German Shepherds and Terriers often engage in tail chasing that continues even as they get older.

The behavior often ensues when a dog has been confined indoors for long periods.

Similarly, the behavior could be a form of compulsion derived from confinement, amongst other things like past trauma, physical abuse, separation anxiety, etc.

If you have rescued a dog, you might not have any information about its early puppy experiences, and these may have harmed your dog's mental health.

Compulsive behavior should always be considered as a problem for your dog and never ignored because your dog is not having fun.

Is Tail Chasing A Sign That Something Is Wrong With Your Dog?

When a puppy or dog appears to be chasing its tail, it may not be the case that it is playing, attention-seeking, or even that it has developed a compulsive behavior.

It could be a sign that something else is wrong with your dog. It would be sad if you stood laughing at your dog's behavior, utterly unaware that they are in pain or discomfort.

You should observe your dog's behavior to see if they are experiencing any frustration or agitation during the activity, as this could signal that the dog is a reaction to something that may be physically wrong with him.

If your dog is trying to get hold of their tail to bite or chew it, then they could be experiencing some form of discomfort, and you should take them to see a veterinarian get to the bottom of the problem (so to speak). 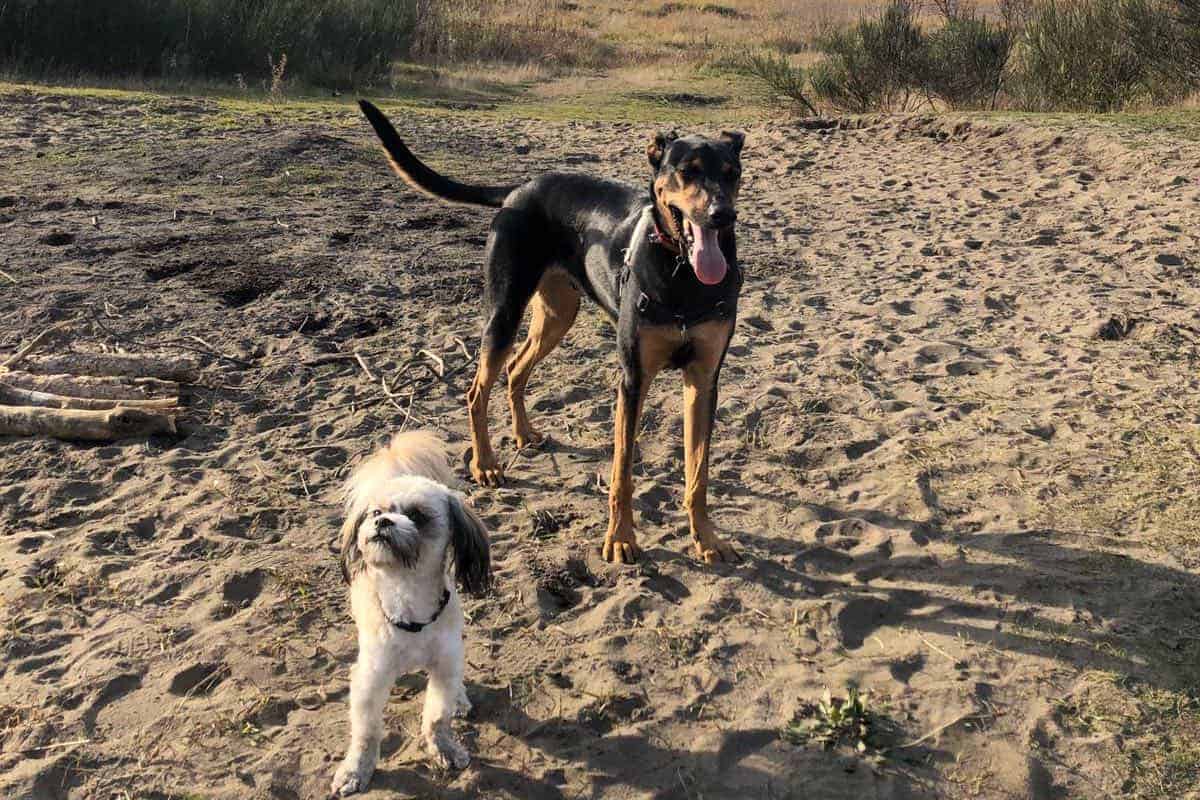 How To Discourage Tail Chasing Behaviour In Dogs

If you have a young puppy that has started to chase its tail, it is essential to work out what the reason behind it is so that you can nip the behavior in the bud early and prevent it from developing into a problem behavior that will later have to be unlearned.

If you are not sure what the cause of your puppy's tail-chasing is your first option could be to mention it when you take your puppy for their check-up at the vets.

Your vet will be able to eliminate any medical issues by checking your puppy all over for fleas and ensuring that they are being treated for worms and other parasites.

The next step is to ensure that your dog has no time to be left bored. You can do this easily by establishing a clear routine for your dog.

Puppies need structure and boundaries, just like children do, to feel safe and secure. When you provide your pup with a clear routine, they will be able to relax, knowing what to expect and when.

This will go a long way to eliminate all unwanted behaviors, such as barking and whining, destructive behavior, toilet accidents, and, hopefully, also your pup's new tail-chasing hobby.

If you are consistent with your puppy routine, then they won't have the time to have to try and entertain themselves because in between activities, they will be too tired and only be fit for sleep.

Don't forget that new puppies need to sleep 18 to 20 hours a day for healthy development.

Finally, to ensure that your puppy is not exhibiting the tail-chasing behavior to attract attention to itself self, you must resist responding to the behavior.

This includes both positive and negative reactions, such as laughing and reprimanding. Your puppy will take both forms of response as attention, and they, therefore, will work toward reinforcing the behavior.

Your best bet is to ignore your puppy when he is chasing his tail and only offer attention when the action has ceased.

One last tip, prevention is key to resolving a problem. So please don't allow your puppy to chase his tail.

Provide distractions in the form of more suitable things for your dog to chase, like his toys, and give him plenty of opportunity o spend his energy is healthier ways via physical exercise and mental stimulation.

Do dogs get dizzy from chasing their tails?

Yes, dogs do get dizzy if they chase their tail long enough.

Do all puppies chase their tails?

It's normal for puppies to chase their tails, but not so much for adult dogs.

How do you stop a dog from chasing its tail?

As soon as you see your dog start to chase his tail, distract him with a toy, food or attention to get him to stop

Puppies can be so adorable that it is easy to make the mistake of reinforcing behaviors that we think are cute.

At the same time, they are little, without realizing that when they are adult dogs that the same actions will not be so cute anymore.

To avoid this, you should try to treat your puppy in the same way that you feel you will want to treat them as an adult dog.

This will encourage desirable behaviors to develop instead of the annoying puppy behaviors sticking around when they are no longer adorable. It is also incredibly easy to miss a problem when we are busy laughing at a puppy or cooing over how cute they are.

Always be vigilant and look out for weird signs that something abnormal is happening. You could be helping your dog in the long run. 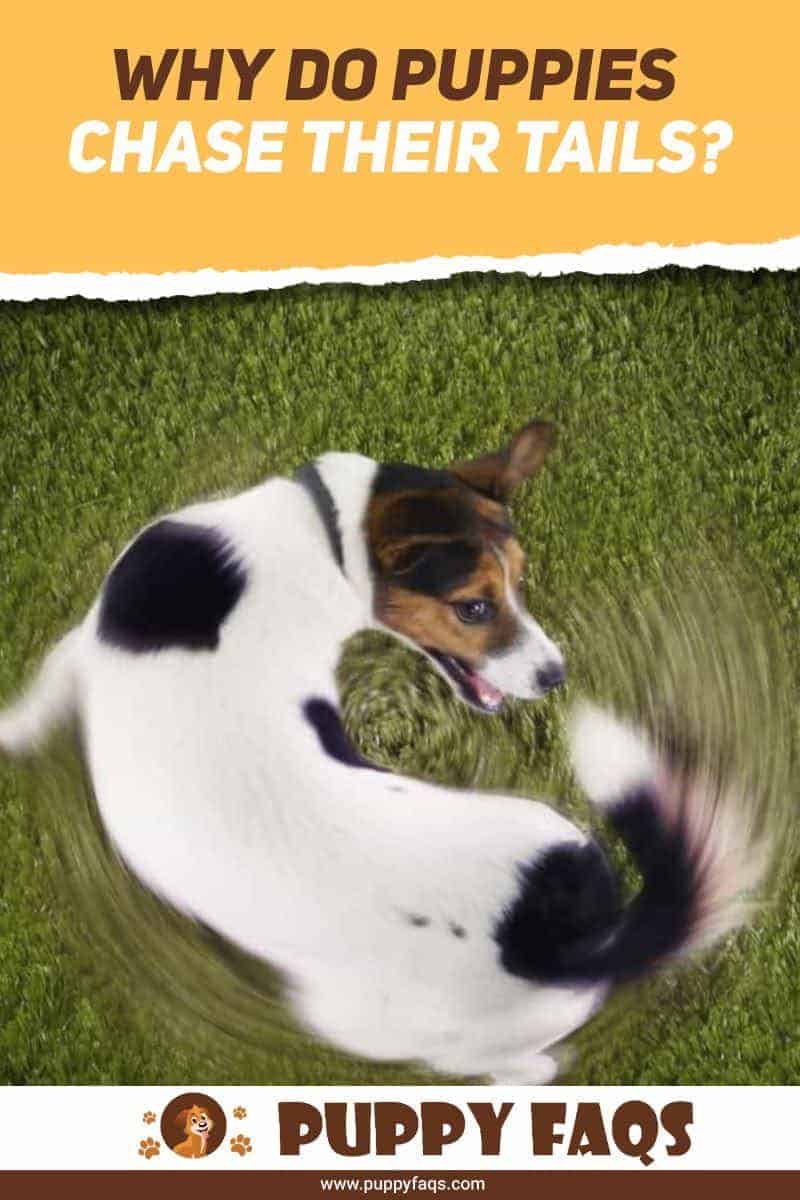 Why Dogs Eat Grass? The Answer Blows Your Mind!

Why Are Dogs Afraid of Balloons? The Surprising Truth?

Why Do Maltese Lick So Much? The Surprising Truth!

Why Does My Dog Stare At Me? The Surprising Truth!

Why Are Dogs So Happy When We Come Home?

Should You Cover A Dog Crate With A Blanket?

Why Do Dogs Howl at Night? The Surprising Truth!

I'm a self-employed blogger, life-long pet parent, and lover of dogs. I have always loved animals, especially puppies. So when my family got our first dog 15 years ago, it was love at first sight. We named her Sassy because she was so small, cute, and had a sassy personality! Once we got her home, I wanted to know everything about caring for her, so I researched online. Eventually, this led me to create the PUPPYFAQS website, where I write about nutrition, health, and care of puppies and the latest news in the world of puppies. In my spare time, I volunteer at my local shelter, which is run by volunteers who are passionate about helping homeless dogs find their forever homes. If I'm not working or volunteering for dogs, you can find me spending time with my family, friends, and my puppy. I have been writing professionally online since 2009. In addition to PUPPYFAQS, I also write for several other pet-related publications.